Who is Alienor le Gouvello?

31 year old of French nationality and resident of Australia for 11 years. I came to Australia when I was 20 on a three week holiday and never took my flight back! I have a passion for travelling, exploring and pushing my boundaries.

At 18, I lived in India on my own for a few months while undertaking an internship in photojournalism. At 20 I started working on remote aboriginal communities in the central desert of Australia. At 22, I was doing a horseback adventure in Mongolia and a motorbike expedition from Siberia to Paris. Since then I have spent many years working on remote aboriginal communities of central Oz in between taking off to adventure the world. I have also lived in a remote peninsula in Bahia, Brazil for a year and half.

My life just seems to always take me to some of the world’s most remote places and I love it that way. Discovering new cultures and exploring new country is in my opinion the most soul enriching experience and one of the biggest eye opener.

November 2015 you set out on the adventure to ride three horse 5330km from Victoria’s picturesque Healesville to Cooktown in tropical Queensland. How does the idea of embarking on this lengthy adventure enter your mind?

I have always had a passion for horses and travelling off the beaten track. A friend of mine mentioned the national trail to me; it planted a seed in my head. I initially intended to do sections of it but very quickly decided I wanted to challenge myself to the entire thing and dedicate my ride to the brumby plight.

Has anyone attempted this journey by horseback before?

Roughly how far do you travel each day?

Anywhere between 15 to 40km, it depends on the terrain and access to water and feed for the horses. 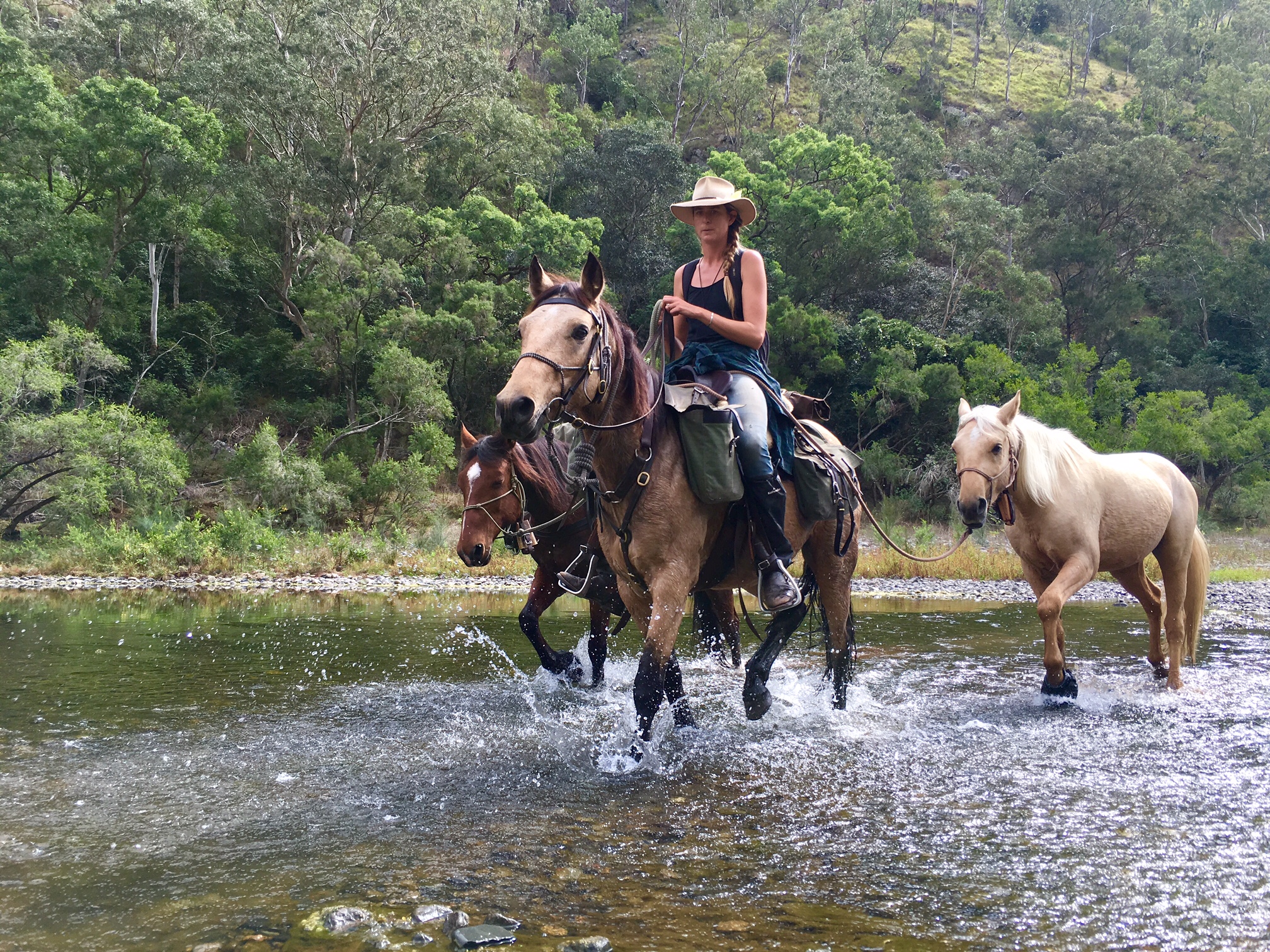 You’ve chosen three wild Guy Fawkes horses. What was the process for deciding which breed of horse would be right for this adventure? Could you please introduce them to us?

I had a fascination for the Australian wild horses also called brumbies when I discovered them in central Australia working on remote aboriginal communities.

I wanted to work with them and thought they would be the perfect fit for the task being resilient, tough animals who have survived through natural selection in the wild. After researching different brumby association I came across the Guy Fawkes Heritage Horse Association. They have a very successful program to re-home horses though passive trapping methods which really impressed me. I went to an open day and shared my project with them; they were extremely supportive from day one and helped me aquire the right horses for the job. They then also mentored me in the training of them in preparation for the trail.

What’s the process like in training the horses? Is it true they were wild only six months prior to setting out?

It was a huge challenge and learning curve to train my wild horses and I was very lucky to have the GFHHA mentor me in the process. I initially had dedicated 3 months for the task. That timeframe soon doubled to six months after failing to tame two out of the three horses initially picked out of the parks. It’s a whole different kettle of fish working with wild horses. You have to completely forget what you know of working with domesticated horses and learn to speak the horse language in order to communicate with them. Having a timeframe is also challenging to train wild horses because some just don’t want to be rushed or pushed too fast. I eventually got my team together after six months of training. My two geldings were just out of parks and completely unhandled prior to the trail. I bought my mare already educated after realising that one of my recently gelded very dominant stallion wasn’t going to be suited to the trail soon enough.

My 5 years old buckskin gelding, Cooper
The first one I got out of the park completely unhandled and trained by myself. He has a beautiful quiet temperament.

My 3 years old Palomino gelding, River
My little baby, a bit young for the trip but I had ran out of options from horses trapped that year. He turned out very brave and willing.

My 12 years old bay mare, Roxanne
My rock. An amazing mare with enormous stamina. I don’t know if I would have made it through the High Victorian Country without her.

Who inspires you to take on this style of adventure? Is there anyone at the moment that you’re following that pushes you to keep expanding what’s possible, both physically and mentally?

I don’t generally follow other adventurers although I found Robin Davinson’s trek across Australia with camels really inspiring just a few months before going on my adventure. I have also enjoyed reading articles on Tim Copes amazing expedition on horseback. I am greatly admire my aunt who has crossed oceans solo on a windsurfer!

Being on a journey that lasts over a year must have lots of ups and downs, especially on horseback. What are some of the biggest highlights? 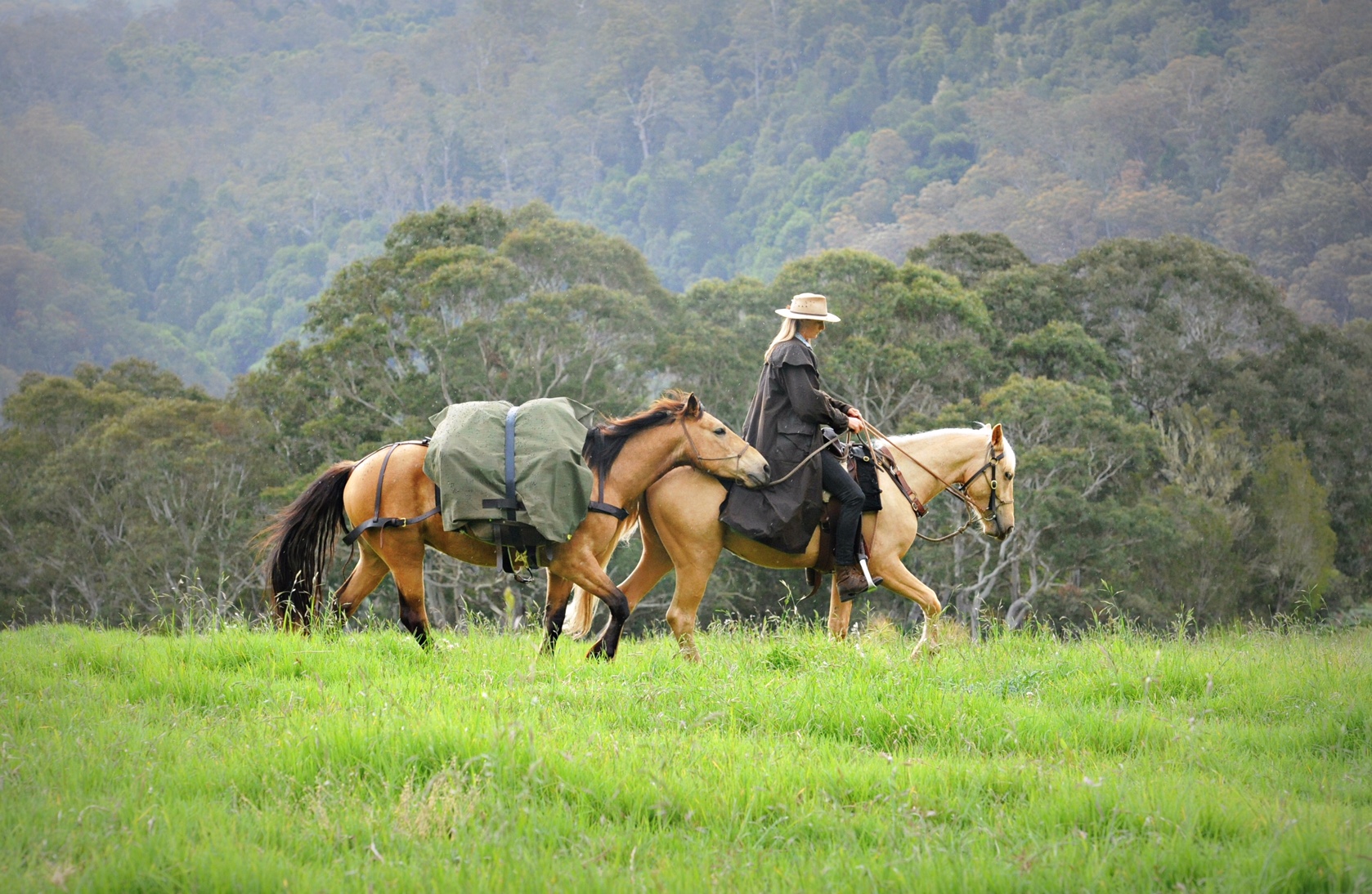 What’s some gear you need to take our readers wouldn’t expect?

Because the amount of gear you can carry on a pack horse is limited, you only really carry the bare necessities. Good safety gear is essential. It the first time I have used a spot tracker. I find it very practical and reassuring.

The Victorian High Country is steep and hard-going. How do you get the horses to cooperate, especially in unexpected weather?

To say the Victorian high country is steep and hard going is an understatement! This is especially so when starting from South as it’s at the very beginning of your expedition.
I wondered many times why would any sane person would want to take a horse through some of those mountain tracks. They were maybe alright for a goat but not a horse!

My two geldings won’t working with me at the start at all. I almost gave up everyday for the first three weeks. They would just put their four feet in the ground and not go anywhere, kind of saying: “no way I’m not going up and down those mountains!” Leading three horses is challenging in itself let alone when they decide not to work with you.

I dragged their butts up down those mountains for the first two weeks, hiking, not riding, hiking! It was not working at all. It was exhausting and killing me. I had a

couple of meltdowns wondering how this was ever going to work. Everyday the question “what on earth have you gotten yourself into??” popped into my head in those first two weeks. But one day, half way up a hill catching my breath, I looked at my mare and told her: “you’ve got to help me girl”. I strapped a knee hobble around her neck and tied both boys to her and we charged on. She dragged their butts up and down mountains for the following two weeks until they realised they won’t going to get out of it at which point we finally were a team working together.

Long distance adventure isn’t new to you. You have traversed India and Siberia by motorbike and crossed 900km of Mongolia on horseback. Did you learn any particular skills on these expeditions that have come in useful for this adventure?

The Mongolian trip was a great insight in how to restrain your horses on a long journey without fences. When all you have for transport are your animals and you are far away from anyone or any help, seeing your animals gallop into the horizon is one scary sight. It happened once in Mongolia and we were lucky a nomad family spotted them and brought them back to us otherwise we have probably stayed put for days...

I learnt to accept that things will go wrong regardless of how prepared you are. You can only deal with situations that arise calmly and as best you can.

When undertaking adventures research and reading books will only get you sofar. Nothing beats local knowledge especially when combined with common sense and trust in your own abilities.

Who are your biggest supporters?

When do you expect to reach Cooktown?

By July this year if all goes well.

What’s next for Alienor in adventure?

I’m not sure. I don’t tend to plan ahead that much. I just go when I get inspired by something. Life is one big adventure.