We had heard things. Rumour had grown of a hike to the south – whispers of a wilderness trail.

For all my research, the internet proved almost fruitless and the National Park website and literature provides almost no information. A ghost trail if you will. That was enough to pique my interest and that of the ladies who I roped into the expedition with me. And it was decided: we were going to into the Budawangs.

Very, very early one Saturday morning we set off from Sydney, singing to myself for about 5 hours while the girls drifted in and out of consciousness. The forecast that weekend had been for a months’ worth of rain in 48 hours. People said we were foolish. Some even used the word crazy. But I was prepared and I had made sure my troupe was too. The day before we arrived the area had received 40mm over 24 hrs. It must have rained itself out because it didn’t rain again, but it had provided the perfect conditions for leeches. 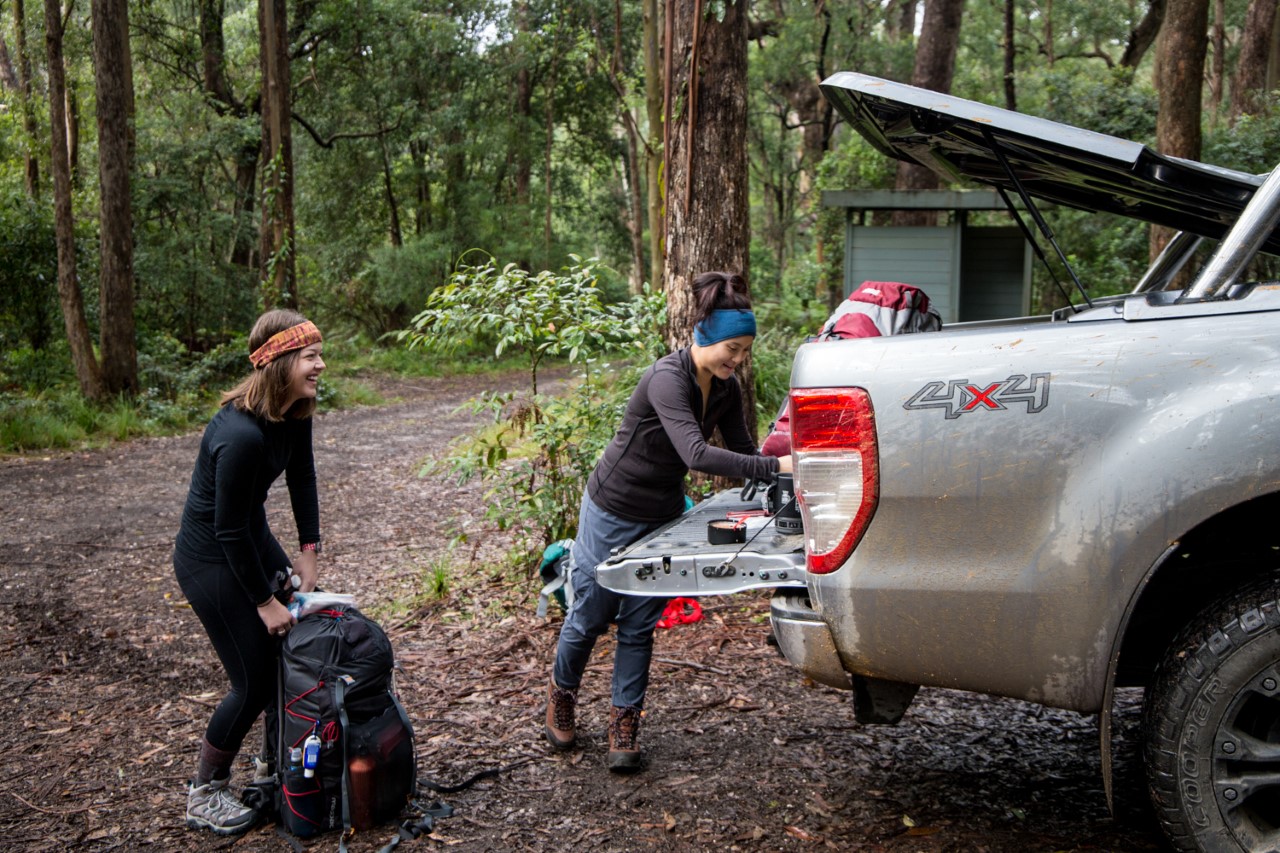 We arrived at the trailhead around 9am that morning and decided a warm brekky washed down with some coffee would be the best way to prepare for our hike. We hastily set off from the Long Gully camp ground fed, watered and already covered in leeches. Our adventure had begun.

Two hundred meters from the trail head a creek crossing is required and it was a little arduous given half our troupe was leech-phobic. We all removed our shoes and socks (and leeches) and waded through the icy cold water. On the other side I quickly re-dressed and began searching for the trail. Even with my sketch map it took me a couple of false starts to get it right. Then I went up what looked like a creek bed and found a glorious sign denoting the entrance to the park.

For the next hour or so I broke the trail through sodden undergrowth and overgrown paths. It was easy to follow but I was soaked and my companions were having trouble with their blood sucking friends. After the first half hour I learned to ignore the screams for help, after all, exposure therapy works, right?

After what seemed like forever we began to walk up and across the face of the mountain- rock face to our right and a steep drop to our left. From my map I knew we had to follow this for quite some time before coming to a pass and it was worrying to find this tricky part of the track did appear to have been very much abandoned. Old stairs and railings had washed away; track markers were non-existent, nothing but a few chains, a lightly worn path and some ominous warning signs. 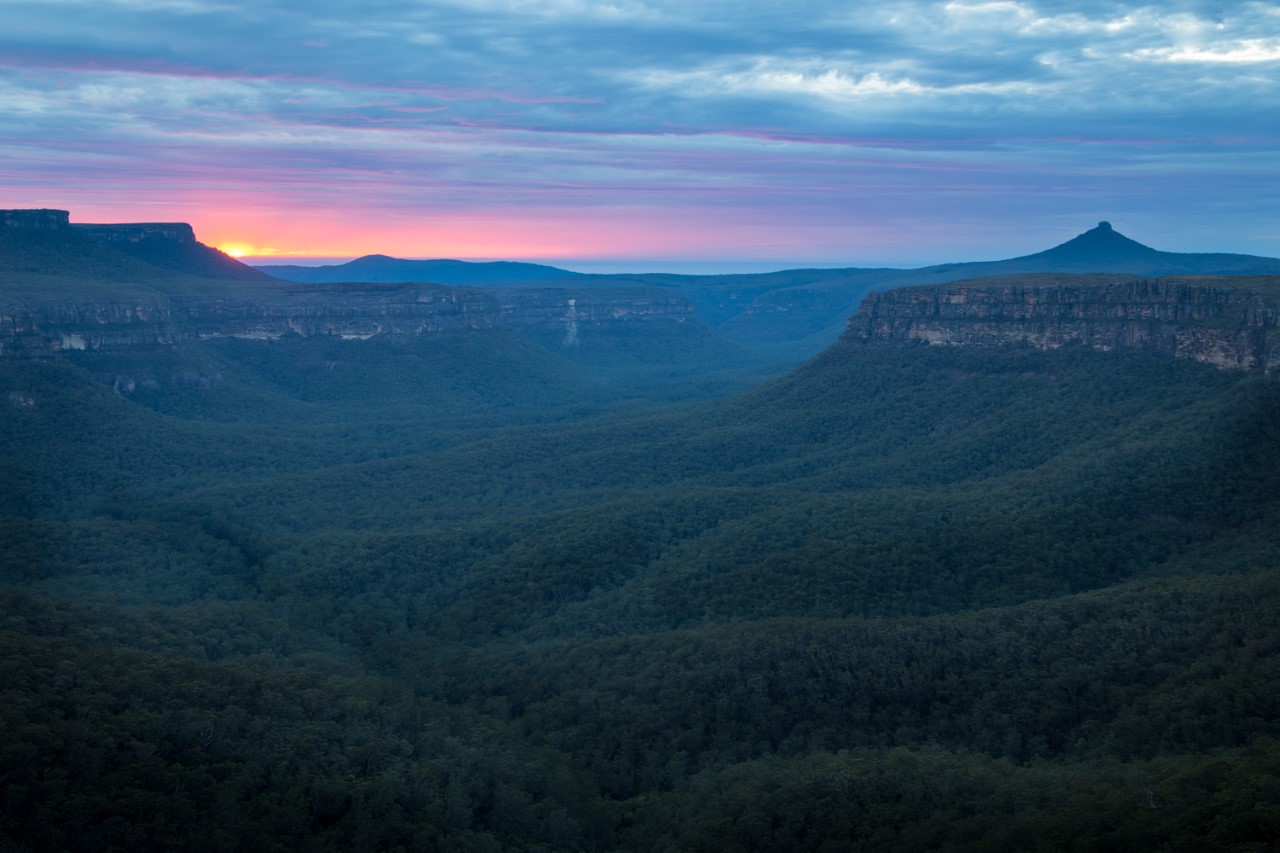 I didn’t expect it to be so challenging to follow a path that essentially follows a rock face and we accidentally walked off track numerous times before coming back to it. Previous hikers had tied knots in grass trees and this was super helpful. The track requires quite a few squeezes between rock faces and scrambling over boulders which is easy for a day hiker but increasingly difficult with a big pack. It was just as we were descending a particularly slippery boulder when one of our team took quite a nasty fall and we decided to rest and refuel.

After lunch we set off, guessing we were about half way, continuing the climb up the mountain as the over growth got thicker, the track got steeper, more eroded and much more challenging. It was taking a toll on the group and a few pairs of shotty knees weren’t holding up with the demands of the hike.

After a few stops, several team meetings and scenario discussions we had made a plan. Turning around wasn’t an option, the downhill would be too punishing and we were closer to camp than we were to the car. We could make camp where we were or we could push to the predetermined camp on the other side of the pass.

At this stage I was worried about how late in the day it was. While we were well prepared with headlights and provisions, no one likes trying to find their way in the dark. Two of us decided to speed ascend, leaving two behind. We would drop our packs at camp and come back down to relieve the girls of theirs before all pushing to camp together.

As we raced upwards my breath ripped through my throat and my lungs burned. Though that was nothing compared to the pain of my quads and hammies as I tried to navigate the treacherously eroded track at many times crawling up steep drops on my hands and knees. I didn’t want to think about how difficult it would be going down the next day. The track levelled out as we approached the mountain pass but it became more and more overgrown as sticks and branches grabbed at our arms, legs and packs. We hadn’t seen a legitimate track marker since we crossed the creek and to be honest I questioned whether we were on the right track at all.

Just as I was beginning to think it was time to turn around a NSW Parks sign appeared out of nowhere! It had arrows, it had distances- it was a sign! We were almost there. I have never felt so much relief and elation. We practically ran down the pass to our camping area, managed to drop our packs and claim a really sweet campsite and then raced back up. By this stage my legs were screaming.

We raced through the scrub and came across our friends after only 10 mins. The girls were fine, their knees in agony but we shouldered their packs and trudged ahead and by 1600 camp was made.

Those whose bodies were up for it then tried to summit ‘The Castle’ and watch the sunset. Key word, tried. The route to the summit of The Castle requires the use of ropes and rock scrambling and we found most of the ropes are old and decrepit so care must be taken. As we began to climb I felt fear bubbling in my belly. It was just way too slippery. We had a rope on hand and I tried securing it as I climbed but it just wasn’t safe after the torrential rain on the smooth rock face. I made the call that it was just too dangerous and not worth the risk and to this day I have absolutely zero regrets about turning us all around that afternoon. 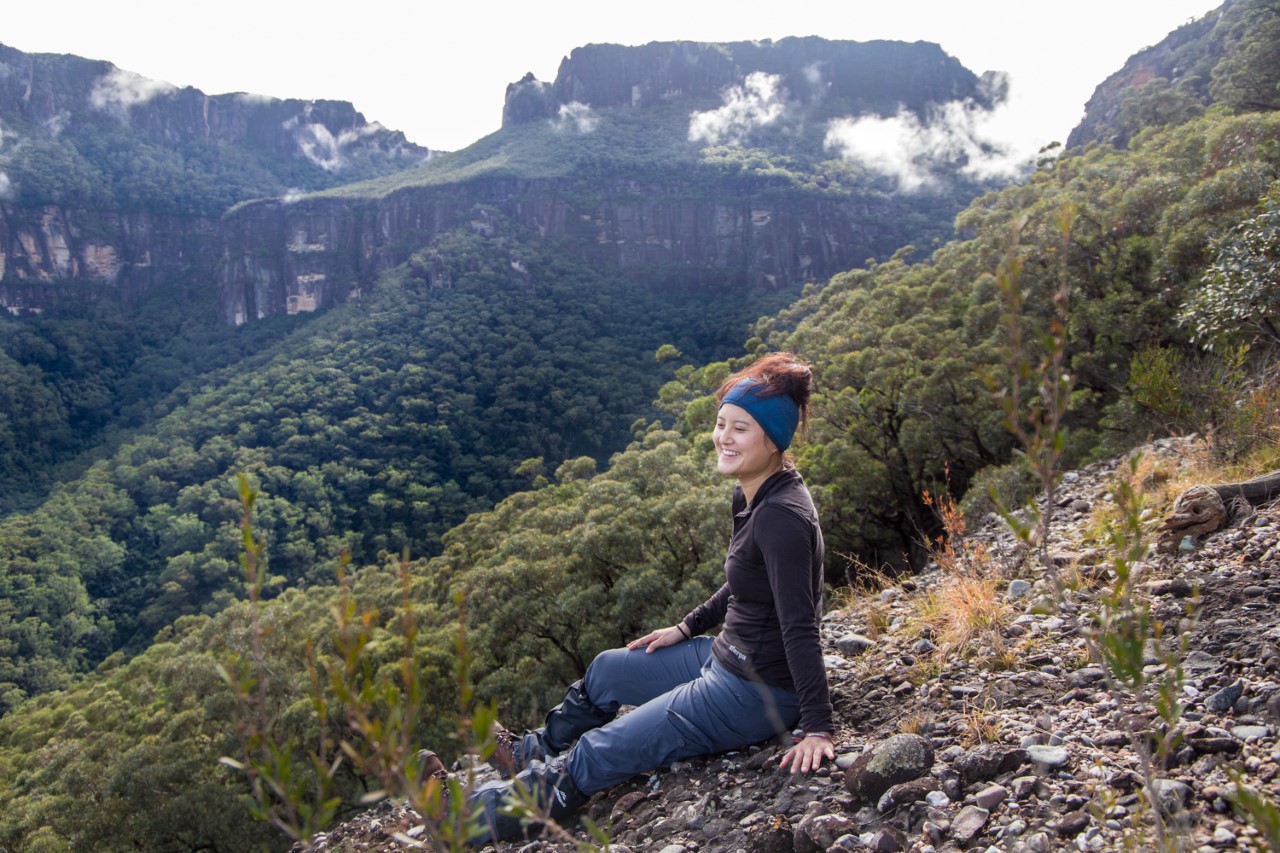 That night we all sat together as the sun set over Pigeon House Mountain in the distance, cheese and wine spread out before us (absolutely worth the extra weight.) We turned in for the night exhausted, sore, but with full bellies and happy hearts.

I woke with a sore head (thanks to the pinot) to the first rays of sunshine creeping in. We ate breakfast as the sun rose through the trees and I quietly thought about the events of the day before and I couldn’t believe the weekend was almost over. The trip back down was far less eventful and for that we were thankful. We made it to the car around 1430, packed our gear into the tray of the ute and took off for Sydney, but not without stopping for the to die for donuts in Berry first.

I have since been back to The Castle and am proud to say the ascent took only three hours, yep that is half! It is amazing what some firsthand knowledge and confidence can do for a hiker. There are a lot of lessons to be learned from our first attempt on The Castle, all of them important. Be prepared, carry a PLB, carry a map and compass. Know your route, hike in groups of four or more if possible and absolutely know your limits and those of your group. We came out of our experience happy little adventures but if we hadn’t been prepared and made smart decisions things might not have gone so well for us. That throw caution to the wind, YOLO attitude just doesn’t fly in the backcountry. You don’t have to take risks and endanger yourself to have fun- you’ve just got to jump into the adventure.