Hinchinbrook Island rose sharply out of the Coral Sea before me, the granite stone cliffs and prehistoric mountain tops disappearing up into the thick morning cloud, the island stretching vastly into the distance in either direction. My stomach turned, nervous at the knowledge I would soon be travelling alone in this Jurassic Park like wilderness.

Hiking around the Cairns area had been my preparation but the 32 kilometre Thorsborne trail would be my first venture into the wilderness on a full pack hike alone. 2018 started with a certainty that I wanted to gain more experience in the wilderness and to do this by myself but I had a lot to learn. During a work break in March while in New South Wales I drove to Katoomba in the Blue Mountains to hike and attend courses in off track wilderness navigation and outdoor survival. These were excellent and helpful but as a beginner it seemed imperative that I research this island well, plan my route and decide on some safety gear including a personal locator beacon (PLB) in case the worst happened.

The weeks passed quickly and now here I was on a small but powerful boat over to make friends with this ancient looking beast of an island. John, who runs Absolute North Charters, a service from Lucinda to Hinchinbrook Island, is an invaluable source of good experience of the island having hiked it many times himself. “When we land, don’t muck about at the boat ramp. Get out, get your bags and move off toward the beach,” John cautioned myself and the others who were also setting out on the trail that day. Surrounded by mangrove I wasn’t super keen to hang around the landing and made my way to the unofficial start of the trail. Twelve other people rambled along the board walk toward Ramsay Bay and quickly we separated out leaving me alone on a pristine stretch of beach then heading over moderate sized rocks and tree roots under a deep green canopy of Far North Queensland rainforest toward Nina Bay. The first day, getting my head right and reminding myself that I was prepared, that I could do this and do it alone was the biggest challenge. 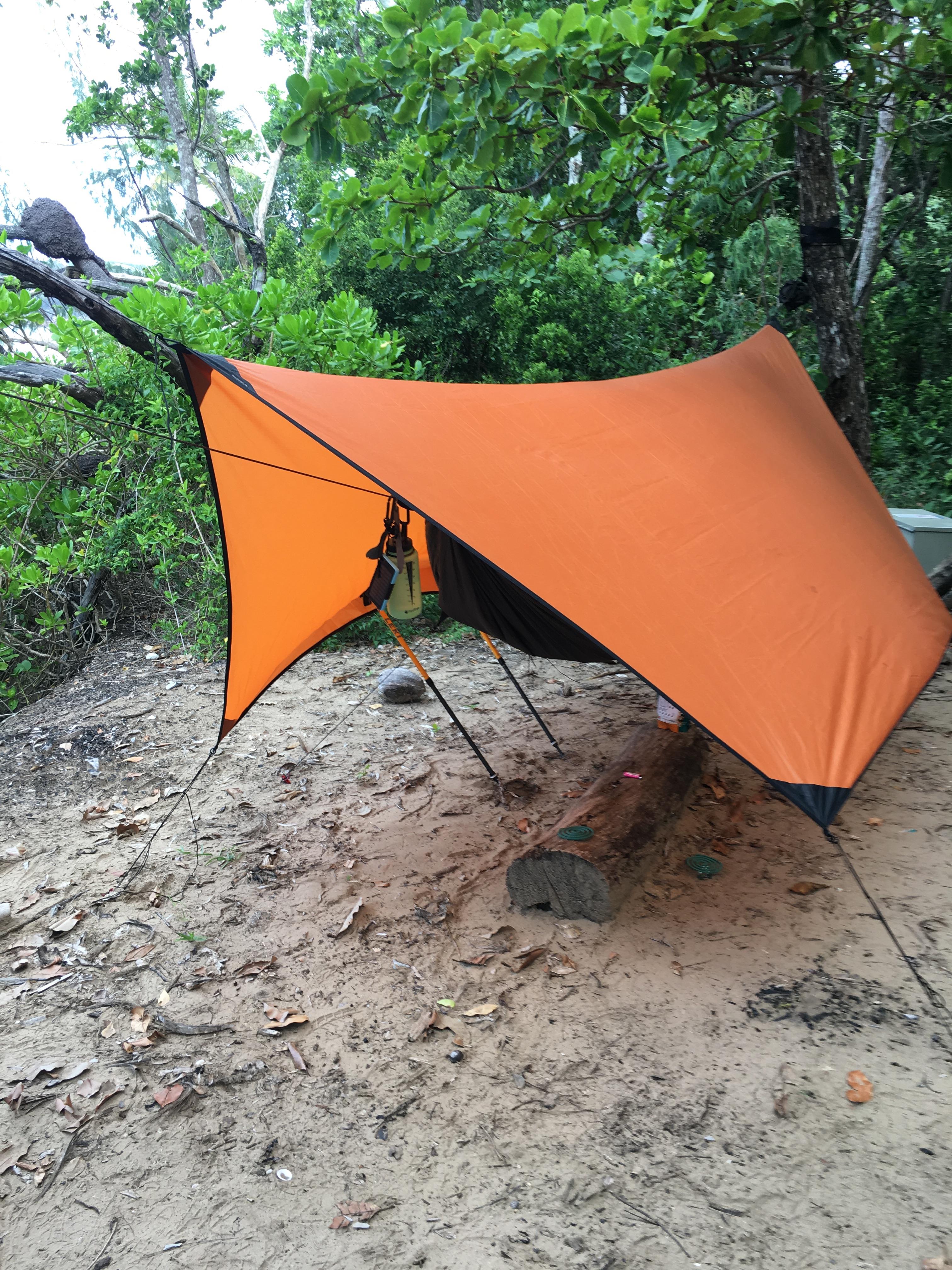 Arriving into Nina Bay just after lunch I went about finding a good spot to hang my hammock for the night, set up camp and stored all food in the rat proof boxes. I finally managed to sit down and boil some water for my dehydrated meal and wondered if I should just let the giant white tailed rats have this particularly cardboard like meal. On a spin around the coconut palm fringed beach and back into the rainforest to the campsite drop loo I passed by two other women, Kym and Emma, who I would run into several times on this adventure. They had set up their camp not far from me and we sat and chatted about the journey so far, what we were each trying to achieve and life in general. I hadn’t wanted company for my trek but honestly after spending a small amount of time with these hilarious and generous ladies, I was happy to know they would be around. Just before dusk the mosquitoes and sandflies started strafing us and after a relatively short but tiring day it was time for a DEET repellant spray bath and an early bed time. Despite minor gear malfunctions during the night I had a reasonable sleep and the bonus of standing in awe of the milky way at midnight while problem solving my weird hammock knot which had started as a clove hitch.

The walk into Little Ramsay Bay is comparatively short. After a brief and deceptively chilled walk along Nina beach the boulder hopping and rock scrambling begins made more interesting when carrying a small house on your back. Slippery rocks, the incoming tide and not insignificant rock climbing aspect need to be carefully negotiated. Kym, Emma and I helped each other out with some of the trickier areas trying not to knock each other off the rock wall as we pushed and pulled ourselves and our back packs around the rocks. Once alone I took a nap under a tree on the rocky beach, enjoying the morning sun before continuing on to Little Ramsay Bay camp where the biggest issue was finding water. Fresh water is found upstream behind the lagoon next to camp in a rocky little rapid also good for a quick wash. Variable reports of Old Salty living in the lagoons either side of camp mean swimming is dependent on how attached you’d like to remain to your limbs. Park rangers came onto the island that day to perform their annual trail assessment. I was fortunate to have a good yarn with head ranger Evan who is an intelligent, genuine and knowledgable man concerned for hiker’s welfare and keen for people to have a good experience of the island while giving it respect. Knowing day three would be a big walk into Zoe Bay, after some star gazing and chatting, camp was quiet save for some soft snoring (not me) and the scurry of rats.

Waking from Little Ramsay to Zoe Bay is next level. It starts with a nice beach walk followed by the shock of rock scrambling, climbing and a really quite narrow trail along a rock face around a small headland. I followed the trail markers into dense rainforest which seemed to have all air replaced with mosquitoes. Trying to keep a steady pace was tough and I found myself off track a number of times. The way ahead frequently obscured.  Wait a while vine infests the interior and sticks to you like velcro until you make the mistake of rashly pulling yourself out of it. At this point the barbs dig in and catches you up ripping clothes, stealing hats, razoring through skin. The solution? Wait while you patiently extract yourself. A number of creek crossings which were at worst knee deep break up the canopy walk. They are a great opportunity to become engrossed in the magnificent creeping vines, pools of clear fresh water, floating butterflies and natural world around you.

A complete description of the Zoe Bay hike requires a discussion of the three swamp crossings - the first ankle deep and the others soul destroying knee deep adventures. As I reached the last swamp exhausted I made the mistake of stepping in the foot print made by someone gone before me. This found me quite stuck in up to just above my knee, my hiking sandal coming away as I tried hard to pull my leg out of the deep fetid bog. Wriggling and widening the hole allowed me to free my foot complete with a wafty chunk of swamp scum smelling of rotten eggs and sweaty cheese.

Zoe Bay camp ground is a number of large groves near to Zoe Falls. That night after a brief swim in the crystal waters of the falls joined by curiously friendly jungle perch I decided to push on to Mulligan Falls the next day. Climbing to the top pool of Zoe Falls with the help of a rope hanging down the 2 metre rock face reveals a stunning view out over Zoe Falls and beyond. The rest of the day was navigating thick scrub while relatively exposed to the sun and elements all the while Diamantina Creek crossing on my mind. Deep, wide and quick to fill when raining I wanted to cross  safely without getting stuck waiting for water levels to drop. Eventually, I descended into Mulligan Falls camp ground area exhausted with very juicy looking feet after a day in wet, muddy socks and sandals.

The following morning Emma, Kym and I walked the last leg together negotiating the tricky to find markers toward Mulligan Bay on to Georges point when the island decided to throw one last challenge of a wild pig rooting around the track up ahead. After deliberation about pig size, pig numbers and phone signals I looked at the topographic map and realised we were close enough to the beach. The plan was to fling our small child sized back pack between us and any pig attack and with me carrying a big stick we quietly made our way toward the ocean. An hour later John was bobbing around at George’s Point, the official end of the trail. He was excited and congratulated me, “Well done Bree! What you’ve achieved is amazing!” I felt that I had achieved a lot over the last four and a half days and was satisfied with how I’d prepared and what I had experienced.

This trip was my first big wilderness adventure and while I had started it hoping to not cross another soul I was glad of the challenge and that I got to experience some of it with two other awesome wilderness women.