Red Bull Defiance is an epic two day endurance event held in Wanaka, a town widely renowned as the multisport mecca of New Zealand. It combines stages of mountain biking, kayaking, and trail running, along with two special stages, to create a real challenge for athletes of all abilities. The spectacular course was designed by top multisport athlete Braden Currie and takes in the best that the area has to offer, over a variety of terrain with striking mountains and alpine lakes as the backdrop. The race kicked off in 2014 and has quickly become a benchmark event for multisporters in New Zealand and throughout the globe. It's an opportunity to line up against some of the world's best off-road endurance athletes, as well as to settle that wager with your friendly rivals once and for all.

The excitement on race day begins long before the starting gun fires. The start line at Minaret Station, on the western shores of Lake Wanaka, is accessible only by boat or helicopter. All athletes, their bikes, and a Red Bull Mini Cooper are loaded onto a barge, normally used for transporting livestock and supplies to and from the station. Thirty minutes later the barge hits the beach and it's all go - people, bikes and gear are hastily unloaded and it's straight to the start line.

The mountain bike course mostly follows an undulating 4WD track with several icy stream crossings, and a couple of decent climbs with steep descents to match. The last stretch along a flat gravel road is a good chance to spin the legs out, catch a breath, and take on the last bits of food and fluid that you might have forgotten about amidst the excitement of racing.

Ditch the bike, slip on your running shoes and it's off along the banks of the pristine Matukituki River. Before long you hit a leg-and-lung burning uphill toward Rocky Mountain, with a brilliant vista of the Wanaka basin unfolding behind as you ascend. Upon reaching the top there's a brief downhill reprieve on the way to special stage one - a 60 metre abseil.

You're harnessed in and roped up, and before you know it you're launching over a rock edge and sailing down the cliff face.

From there it's a scramble over the rocks, a trot past Diamond Lake and through farmland into transition two where the tandem kayaks await. Focus is required to keep up the intensity on the last stage of the day - it's easy to get lost in a daydream as you paddle the deep blue water with striking mountains rising immediately from the water's edge.

The bright Red Bull arch marking the finish line for day one comes into view, and sparks the extra bit of energy needed to power to the end. Put your feet up and relax once you're fed, hydrated and organised for the next day, and revel in the satisfaction of what you've just achieved. 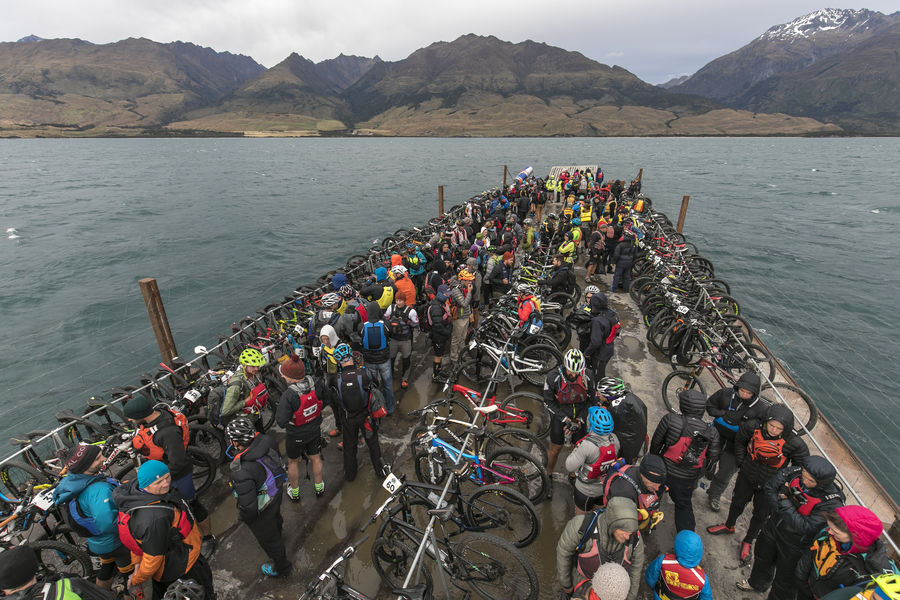 The Le Mans start on the Wanaka waterfront on day two is thrilling mayhem, with athletes jostling to get into the kayaks, off the beach and into a good position on the water. The first half of the scenic kayak stage is on Lake Wanaka and the second half is down the Clutha River, the 6th fastest flowing river in the world.

A scramble out of the kayaks and up the river terrace leads to the second special stage - a clay bird shoot where one hit is all it takes and you're allowed to progress to the next stage. Not hitting any targets means you'll be sitting out for a short time penalty.

Next up is a 28km mountain bike through Criffel Station and along the Criffel Range tops. The first few kilometres of the mountain bike are along flat roads and farm tracks then it's into a relentless climb where the puffing really begins.

Up, up and up ... over 1,200 metres of elevation gain later you hear those magical words "it's all downhill from here" from the friendly marshal in fluoro, then hit the exhilarating descent.

It's a fast approach to the Cardrona Valley below where you'll lace up the running shoes again for a 30 km trail run. The route begins with a gradual climb along Spotts Creek then zigzags up a hill face, eventually popping out onto the ridgeline leading to Mt Alpha and Roys Peak. It's a rocky and narrow trail along the alpine traverse but there's spectacular views in all directions so be sure to steal a glance or two when you can.

This year the run course was shortened by 8 km thanks to an overnight dumping of snow which made for treacherous conditions along the tops, but this didn't make it any less challenging. The long descent from the peak, a bit of a thrashing for tired legs, leads onto the lake shore trail and to the mad dash for the finish.

Crossing the finish line with a big grin and buzzing with satisfaction, after pushing physical and mental limits for the past two days, makes putting in the hard yards all well worth it. It's a tough challenge but certainly an achievable and realistic goal with the right preparation. We wouldn't be tempted if it was easy, right?